Virtual J - Visit theJ.org/VirtualJ for activities and programs while you're safe at home.

1,000 stitchers in 20 countries' ambitious project to create the entire Torah in needlepoint. 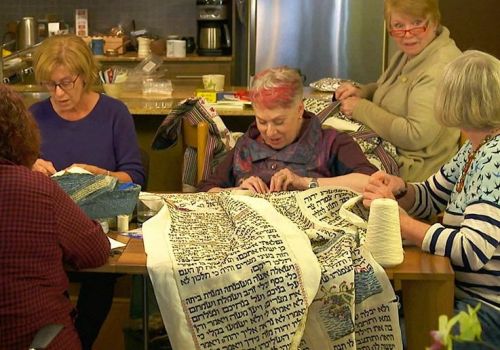 Abraham's kids plant him in a Buenos Aires retirement home. Instead he books a one-way trip to Europe to find the man who saved him from certain death.

A group of seniors share the joys of community and ritual, while ushering in Shabbat at Wendy's, however unorthodox it may appear.

A D.C.-area-based mom on a mission to persuade her daughters to raise her future grandchildren Jewish... and see Judaism as more than matzo balls.

The mischievous Curious George made his first appearance over 75 years ago. If not for a pair of handmade bicycles, however, his creators might never escaped Nazi-occupied Europe.

When his wife leaves him, Nate, a New York playwright begrudgingly moves into his jokester father's retirement community. He stumbles on a troupe staging a musical and agrees to help.

In this sweet story of love, rejection, and co-dependency, Gadi wants to donate a kidney to save his father's life but the transplant committee objects to this special-needs son's plans.

Smart and shy, Shir’s life about to change now that everyone knows her as the sister of Tomer, a singing reality TV star. How far is Shir willing to go to join the in-crowd?

As a child, Debbie heard about her father’s transformative experience seeing Leonard Bernstein perform at a Displaced Persons camp. Today she meets the maestro.

Lotoro, a professional pianist and quiet hero, has scoured Europe to discover music composed in WWII camps. From operas, folk songs, liturgical works, to swing and gypsy music, each note sounds like a challenge to the oppressor.

A cynical reporter investigates the murder of a prostitute, leading him into the dark underworld of pornographers and brothels, crime syndicates and communist cells, and the highest echelons of power in 1930s Hungary.

Biker-flick meets Holocaust doc as 11 Israeli motor-bikers carry the Maccabi torch from Tel Aviv to Berlin, just as riders who spread the word about the first Maccabi Games did in the 1930s.

A gutsy lawyer defends Nelson Mandela and nine of his black and Jewish anti-Apartheid compatriots while attempting to hide his own ties to the resistance.

A young Jew hurrying home for Shabbat meets a Palestinian hitchhiker. A series of mix-ups  eventually teach him a lesson in love.

Two soldiers, one goal: Survival! An Israeli and an Egyptian  are trapped in an abandoned post the day after the 1967 cease fire... outside a Jeep awaits the victor.

A rare firsthand account of Feiga Shamis—a mother of 12 desperate to keep her children safe during the Pogroms. Told decades later by her granddaughter.

Featuring a post-screening Q&A with LeeAnn Dance and Cliff Hackel, filmmakers of My Dear Children.

Naomi is a Mossad agent sent to Hamburg to protect Mona, a Lebanese informant. Two weeks in a safe house becomes tense as their fate takes a surprising turn.

A smooth-talking businessman focuses on what the Germans need most in 1946: fine bed linens wrapped in amusing stories!  But questions about his visit to Hitler‘s mountain retreat catch up to him.

Naomi, a secular Israeli, moves to  a Haredi area of Jerusalem while fleeing the pressures of being a concert pianist. She unexpectedly connects with a musically gifted Orthodox boy, and an Italian monk and organist, which attracts hostility from her neighbors.

After years of defeat, Team Israel finally plays in the prestigious World Baseball Classic in 2017. Follow the journey of the team, including several Jewish American Major League players visiting Israel for the first time, in this story of sports, patriotism, and personal growth.

Thank you to the 2018 NVJFF Committee:

THANK YOU TO OUR SPONSORS