For the health and safety of our members, guests, and staff, masks are required in all shared spaces at the Pozez JCC regardless of vaccination status.

Tashlich at the J 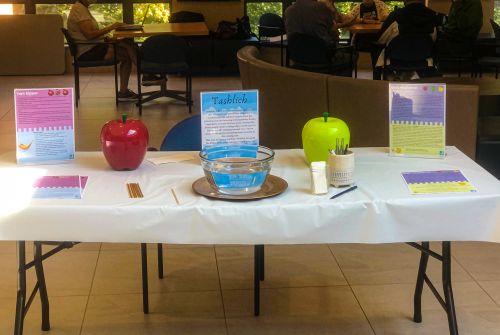 This time of year, Jews around the world observe many of the holiest days in the Jewish calendar. Last week, Rosh Hashanah, the Jewish New Year (5782) was ushered in. This week, Yom Kippur (Day of Atonement) will be observed from sundown Wednesday, September 15 until sundown Thursday, September 16. The 10 days between Rosh Hashanah and Yom Kippur are referred to as the Days of Awe — a time when Jews engage in prayer, acts of charity, and repentance.

One ritual performed during the Days of Awe is Tashlich, which literally translates to “casting off,” is a ceremony performed where Jews symbolically cast off their regrets from the previous year by throwing items (pebbles, frozen vegetables, etc) into flowing water. During this ritual, people think of things they would want to improve in the coming year and then “throw away” their regrets, promising improvement in the coming year.

We know that we can and should always act in a kinder, gentler way toward others, be better role models, speak without gossiping, treat others with honesty and always try to act with the utmost integrity.  However, we are human and sometimes falter and don't always remember to act in this manner.

While we should remind ourselves everyday to try and do better, the Jewish ritual of Tashlich provides us with a yearly reminder to take stock of our behaviors and actions and look from within. We ask ourselves, "What actions and behaviors would I like to remove and/or improve upon in my everyday life? Did I hurt or wrong someone knowingly or unknowingly?"

This is a New year and a New you!

This year, the Pozez JCC has a symbolic Tashlich set-up in the lobby. We invite you to write on a soluble piece of paper the behaviors, actions or anything else you would like to change/improve about yourself in the new year, toss them away in the water and begin anew.